Muskie Fishing from a Woman’s Perspective Muskie Fishing isn’t only a Men’s world, as many people thought for years. Everywhere across the country more and more Woman takes place in this great sport. Being outdoors, in nature, it doesn’t really get any better right? Mrs. Moon Guide, aka Hilary Schulz, talks about her view on Muskie fishing, and why she loves it so much!

First of all, I wasn’t born in the woods… but I got there as fast as I could. The old saying goes that I always felt fit my soul. Whether it was exploring the Wisconsin woods behind my childhood home, exploring the paths and the call of the river as it rounded its corners with my sister and brother. Or I remember going out on chilly May mornings to fish for Trout with my dad, later in the year for Panfish, and of course the Wisconsin tradition of ice fishing for pike. Then there was my Mom pointing out all of God’s beauty wherever we were, from frosted limbs to wildflowers hiding under trees. For people that know me it does not come as a surprise that I love to Muskie fish, but it was not always that way…

Over the years I had a love-hate relationship with Muskies. In the beginning, I would fish for Bass while my husband, Todd, fished for Muskie because there was no way I wanted to hold anything with teeth like that, and I also saw enough videos of all that can go wrong, and I did not want to mess up on a trophy fish. We joke about this now, because now I know there are plenty of bass baits that easily could have enticed a Muskie just as easily as the bass I was after. Watching Todd’s excitement about follows and catches, finally made me brave and try a couple of lures. Todd was patient as he taught me different lures and techniques like figure 8. The beginning taught me many things!

First and foremost get a pair of polarized sunglasses. I wore regular, un-polarized sunglasses and they simply did not cut glare to see into the water as well. It is beyond frustrating to not see follows. Follows equal hope, and while all Muskie anglers know a fish can come at any time without warning, it makes those 10,000 casts more bearable. I also have different colored lenses to use depending on sunlight and time of day.

Second Muskie fishing can be repetitious so make it interesting. In the early morning, as nature is waking up around you, Loon calls, Deer stopping for a drink, Eagles taking flight, it is not hard to relax and take it all in. Later in the day when pleasure boaters are out, I enjoy playing music. It helps me switch up what I am doing easier, I make my bait dance-try different retrieves with the tempo of the music, whether it is speed or patterns. My first fish came on a topwater bait that I was dancing across the water side to side, Todd said “slow down” my response, of course, was “but it likes dancing like this.” Of course, the next cast with a little less motor power, my first and personal best came and crushed my bait. Next, make each figure eight is slightly different, speed, depth, shape- some oval, large L some classic, I feel like switching each up helps me give them extra focus and breaks up the monotony. 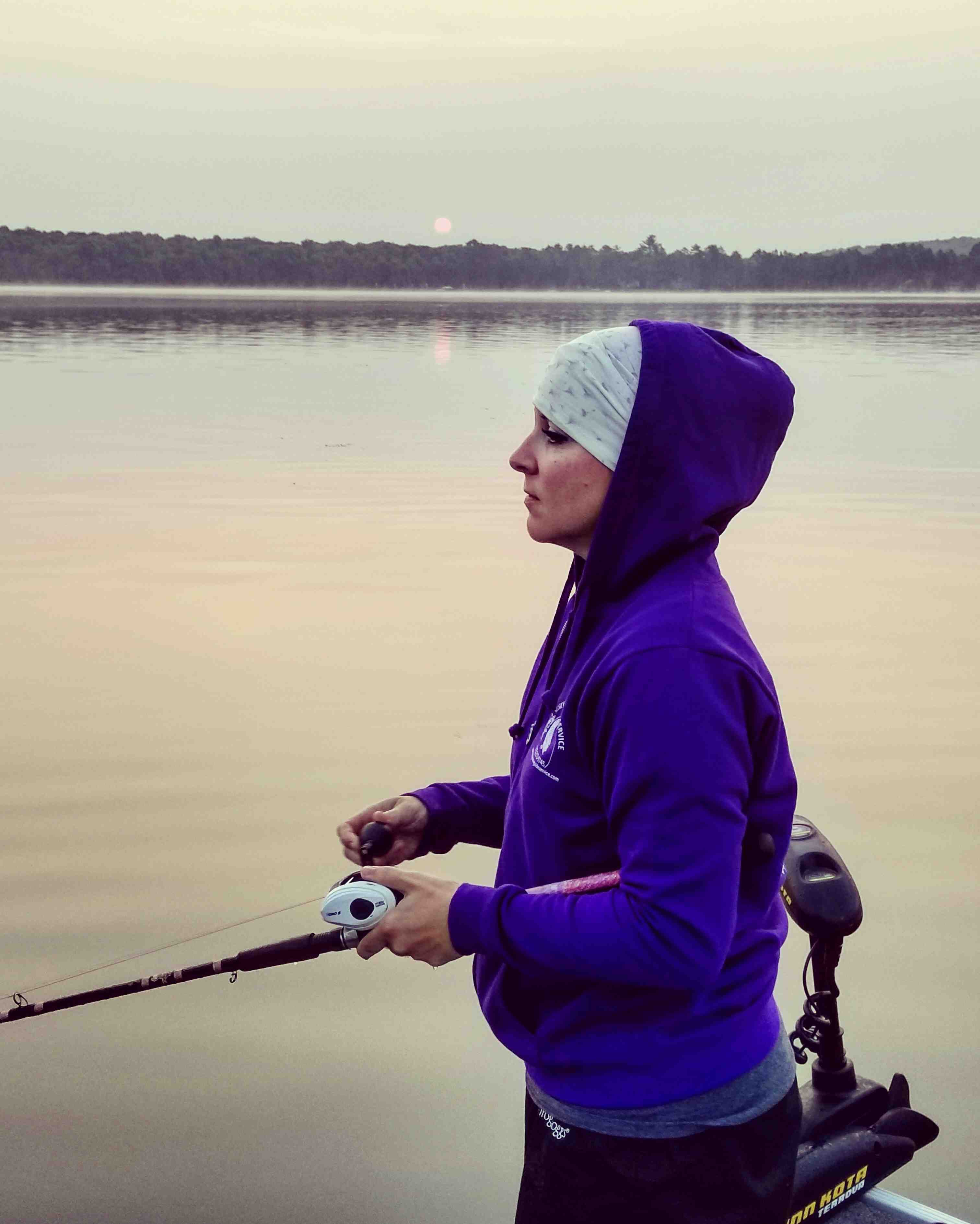 For women looking for a good workout for shoulders, arms, and abs, Muskie fishing can help these problem areas; especially if you are doing figure 8’s correctly and of course when you tie into a big girl or two. To the detriment of my diet, as a nod to my father who always seemed to have some sort of sweet on our fishing adventures; our boat almost always has a bag of peanut or almond M&M’s for a protein boost and some sweetness. Todd often jokes that M&M’s would be a great sponsor for me. Basically, find the thing that will keep you going through a long day, even little joys can make time on the water that much better.

The third is to have equipment that fits you. When I first started Muskie fishing my wrists would get sore, I could only seem to fish a couple of hours then would need a break, Todd watched how I was holding my reel and suggested I try palming it and now I can fish all day. If something does not seem comfortable ask someone with more experience to take a look. Investing in a rod and reel that fits you, to begin with, plus an add on like Outdoor grips JigRippers will not only decrease your fatigue and wear and tear on joints but can add finesse to how you work your baits through the water. If you are still finding yourself fatigued change up your bait, occasionally even if a bait is heavier but has a slower retrieve it can allow for the break or change that my body needs to keep going. 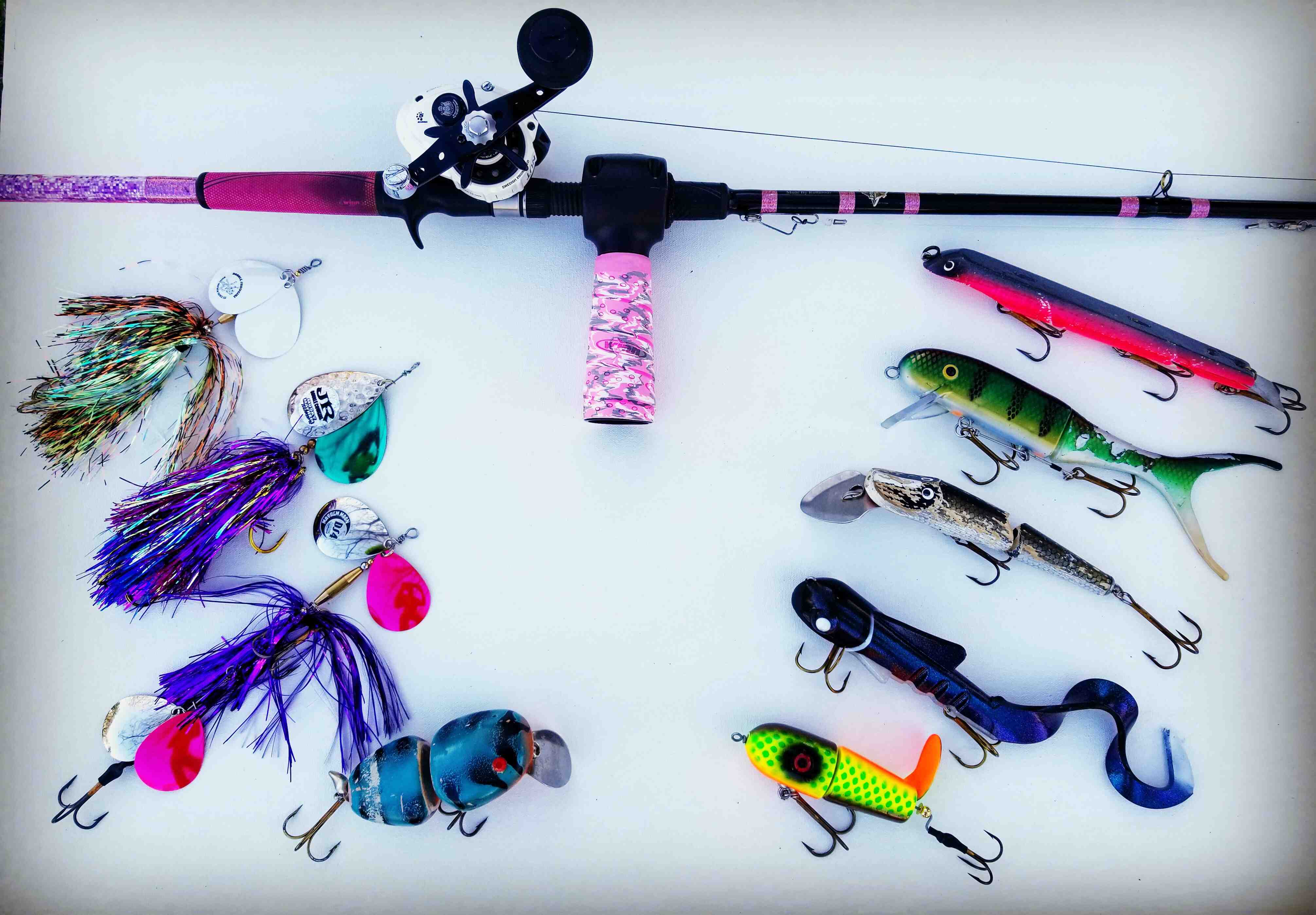 So as I put the pieces together I still needed to confront the worst thing I had going for me…my fear. My nightmares continued, wondering how I would react catching one boat side or seeing one coming from a distance and keeping my composure under that kind of pressure. My fears came true in the last 10 minutes of the National Championship Muskie Open 2017; I finally had a fish explode boat side as I came into the first turn of my figure eight. Then last year at a great fishing fundraiser “Jiggin for Jaden” I finally had a Muskie slitter out from under the dock, gills flaring, stalk my bait, to say I kept it together would be a stretch of the imagination; but I turned my focus to my bait, to keep the blades spinning in my figure eight and I landed by far my Biggest fish.

Now Muskie fishing is a love story & obsession for me, they are the trophy like no other. I daydream about vacations to other states, about adventures on new and old bodies of water here. I want to have my hands on as many different Muskies as God and my talents allow.