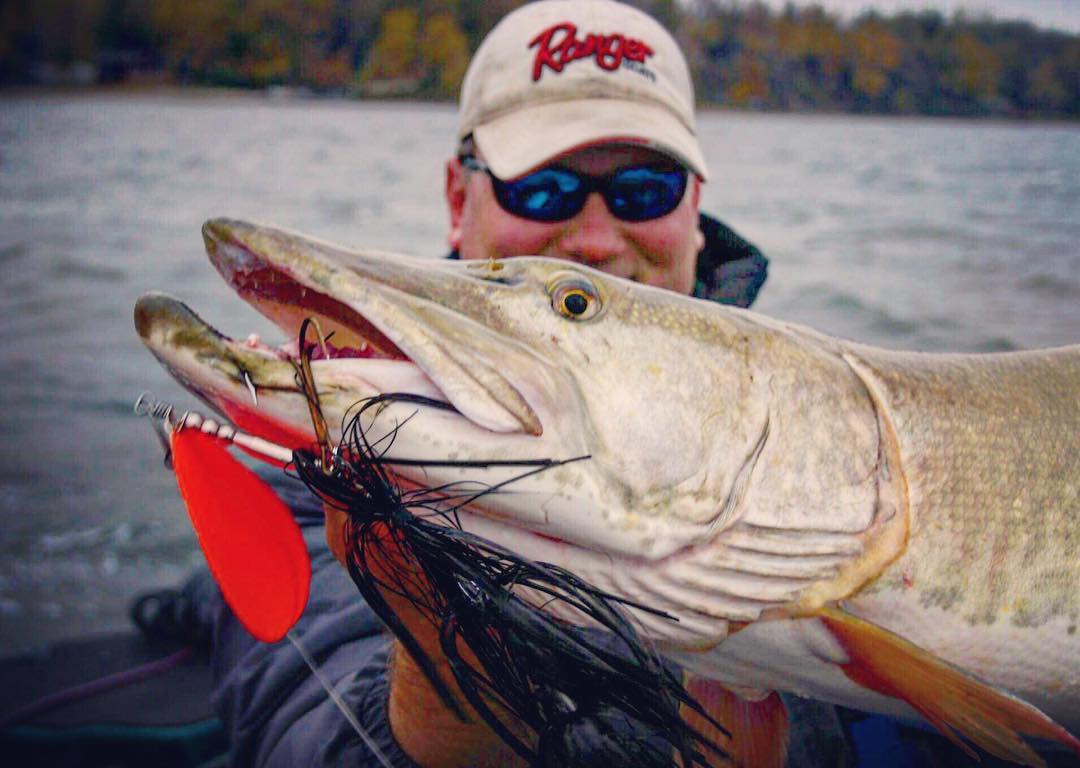 Bucktails have long been the go-to bait when it comes to Muskies or other predatory fish. Bucktails are so versatile and can be fished from the first day of the season all the way till ice up. They come in several styles and sizes, single bladed, double bladed, with an array of different skirting materials. Brad Hoppe from Musky Mayhem Tackle LLC, the worlds Biggest manufacturer of Bucktails made for Esox digs in deeper and talks speed, seasonal structures and talks a little about bucktail designs!

One of my favorite discussions in the game of Muskies is the speed of retrieval. I truly believe that the speed of retrieval is maybe second only to weather when it comes to catching. When we first came on to the scene as a manufacturer there was a large misconception by many that you had to burn our lures to get a bite. This is so far from the truth. When we developed the Double Cowgirl we found that slow rolling the bait, we were able to contact large fish in great numbers but let’s step back a second. What I have seen, burning a bait works really well when the body of water you’re fishing has a lack of baitfish. With small baitfish, counts come feeding competition and this usually means the Bigger stronger fish will eat first and the most as they are the first to reach the bait. So on the opposite side of the spectrum when you have a strong count of baitfish on a body of water many times the predator fish almost become lazy as it’s easy to find a quick meal hence a good reason to slow down your presentation.

On any given day speed needs to be considered and the only real way to know what they want is to duplicate a speed once you connect with a fish. When I am guiding I like to have the guy in the front of the boat burning one bait while the second guy is maintaining a moderate speed and the guy in the third seat slow rolling until we learn what the fish really want. By having the speeds in this order it keeps everyone out of each other’s way. If the guy in the front retrieves slow his bait would constantly be in the way of the guy next to him. Speed also will dictate how deep a blade bait rides in the water column. Blade sizes can also be a huge factor in how deep the lure will ride in the water column. Larger blades create more lift, especially when retrieving fast and a small blade or a willow shaped blades will ride deeper as they do not create as much lift. 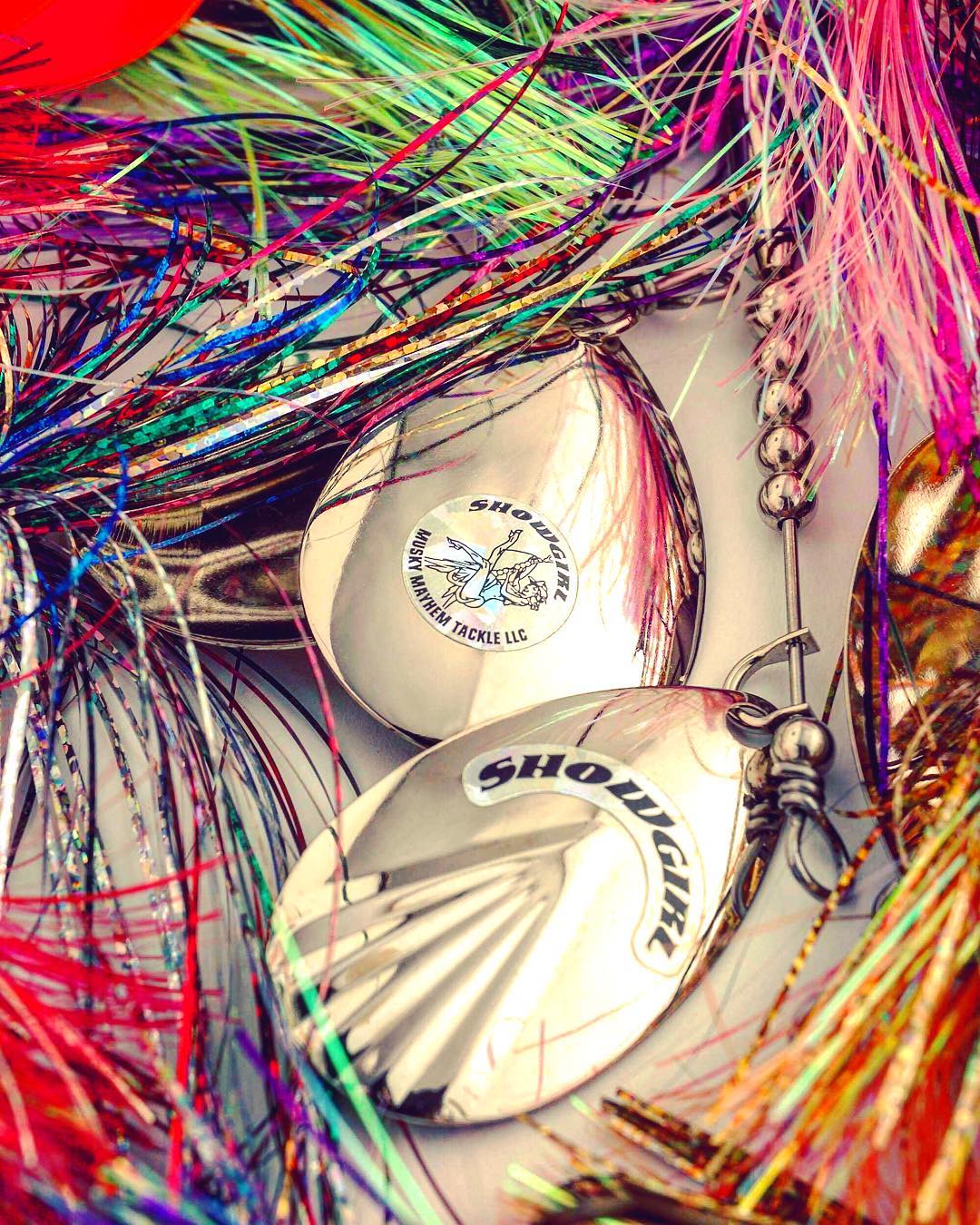 This is also the case with single bladed lures. One other consideration is thicker blades will spin closer to the main shaft which can also create less lift in the retrieve and less vortex behind the lure. I have always liked thinner blade thicknesses because I like a bucktail in order to create a stronger vortex and this means more skirt movement and vibration. At the end of the day, speed can dictate where and how deep or shallow your bucktails will run by either slow rolling or burning them in. This is an important factor to consider as you fish different kinds of structure.
With a lure as versatile as a bucktail structure choice can really vary. I have used bucktails from a foot of water to a hundred feet of water, shallow sand or weeds, rocks to open water. No matter your style of fishing methods the bucktail will be effective!

Adjusting how you fish by taking the time to understand the body of water you choose to fish pays large dividends. There are so many factors to the fishing game but if you pay close attention to the details the rewards will soon be seen. I like to think of fishing as a large puzzle and that means one piece at a time. A huge factor in the bodies of water I fish is finding the greenest newest weed growth. Generally, these new weedy areas provide a great amount of ofoxygen levels as well as tons of baitfish. Where there is baitfish there will be predators. As the season transitions weed beds will die off but more importantly, new ones will be emerging and it’s important you know where they are. A great way to achieve this is by hitting the water early in the day and scouting.

The AM usually provides calm water and makes it easy to go locate nice weed beds visually. Take the time to mark out the weed bed edges on a GPS so that you can dissect them later in the day. Pay attention to the details, points, inside turns, and maybe just a rock or depth change. These are all ambush spots for large predators. Casting angles can also play a factor and could add another 400-500 words to this article but remember to play the wind direction. If you’re so lucky to have rock piles in the body of water you fish, know them well, as they really start to be effective as water temps fall. The rocks will maintain warmth from the sunlight making them a

comfortable spot to hang for baitfish as well as a Muskie. Shallow sand areas can also become a major factor on the first cool-downs of the year. The last take in where you’re seeing baitfish as they can also dictate where you should be spending your time and baitfish in the open water can become the actual structure.
So how do you decide what bucktails to throw? Most of the time I choose larger lures as I believe larger Muskies look for an easy large meal vs a small lure but there are times for both. If your fishing and see tons of small baitfish I will a lot of times downsize, kind of matching the hatch if you will. There is also, in my opinion, a misconception that downsizing in the spring is the way to fish. 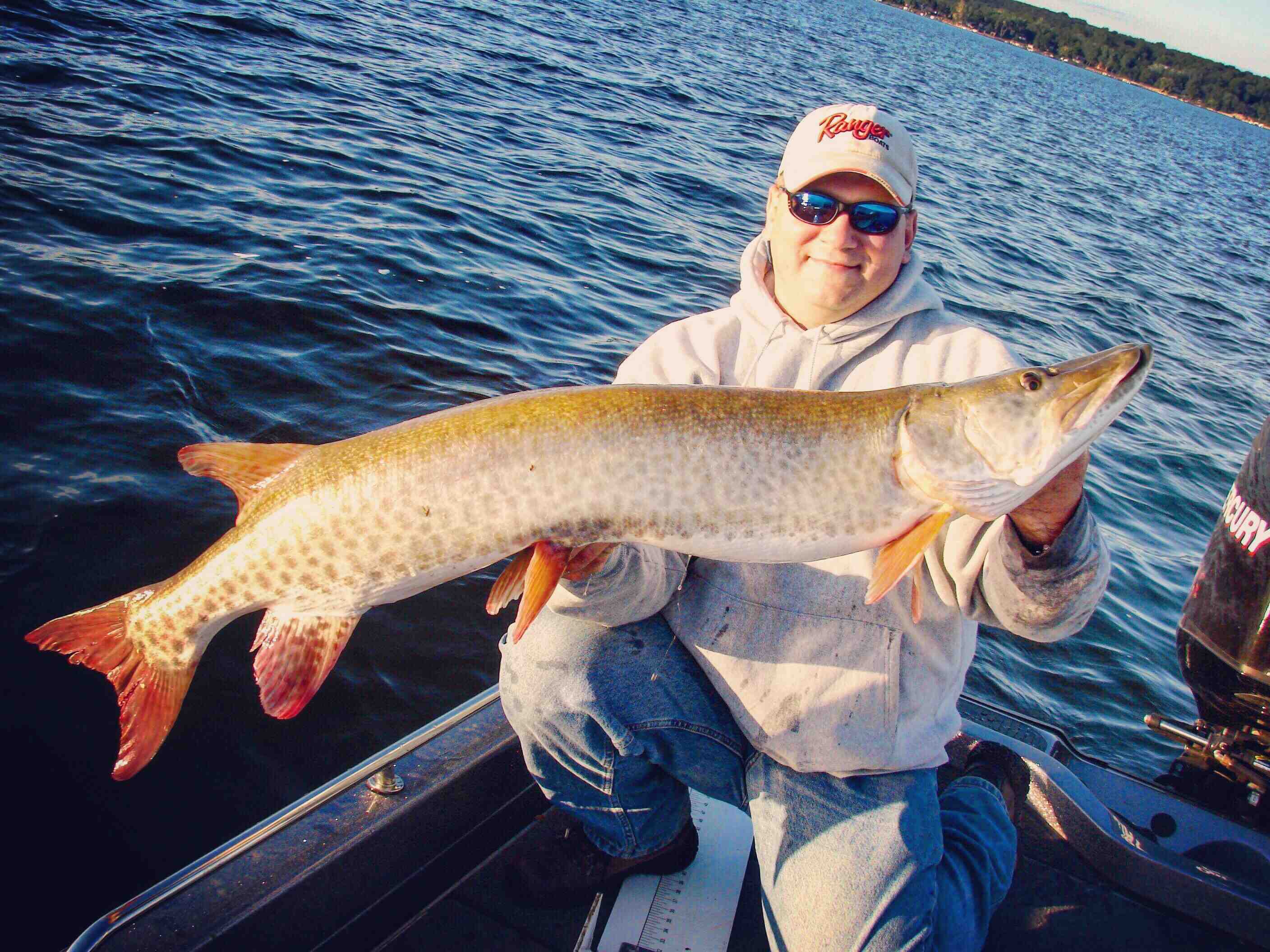 I generally always fish a larger bucktail from the first day of the season knowing most of these fish have recently spawned and a large simple slow easy meal is just what they’re looking for. Another great time to downsize is in the fall when you start seeing the first cold fronts. These cold fronts will slow down the bite but burning a small bucktail can trigger a reaction strike. Maybe you love night fishing, this is the perfect time to throw a large thin bladed bucktail as speed becomes a large factor. It’s just plain hard to see in the dark and that’s no different for a Muskie. A large bladed bucktail is a large target and provides tons of vibration and is easier to slow down allowing the fish to locate it easier. Another cool thing about large bladed baits is that they will push a lot of weeds out of the way making them less likely to get hung up.

If you are a troller you want to use a thicker bladed bait with heavier clevises just plain and simple for the abuse. Earlier in the article, I mentioned how we slow rolled a Double Cowgirl with lots of success. Slow rolling bucktails on hard deep break-lines is a presentation allowing the bait to gain depth, sometimes this can be the answer as big blades allow you to hang the bait in their face. The bottom line is experimenting with bucktail size and speed will help you produce better numbers in your boat.
So I challenge all of you to take a little time each day to get out of your comfort zone and explore. Adding one or two spots on each trip will start building your more effective milk runs. Use a bucktail as its probably the most versatile lure in your box for locating and catching Muskies. Bucktails can be used for both casting as well as trolling, slowly rolled or burnt, over your favorite shallow area or thick weed bed, deep water breaks, open water and so on. Not all lures are created equal but bucktails are definitely a go-to lure! 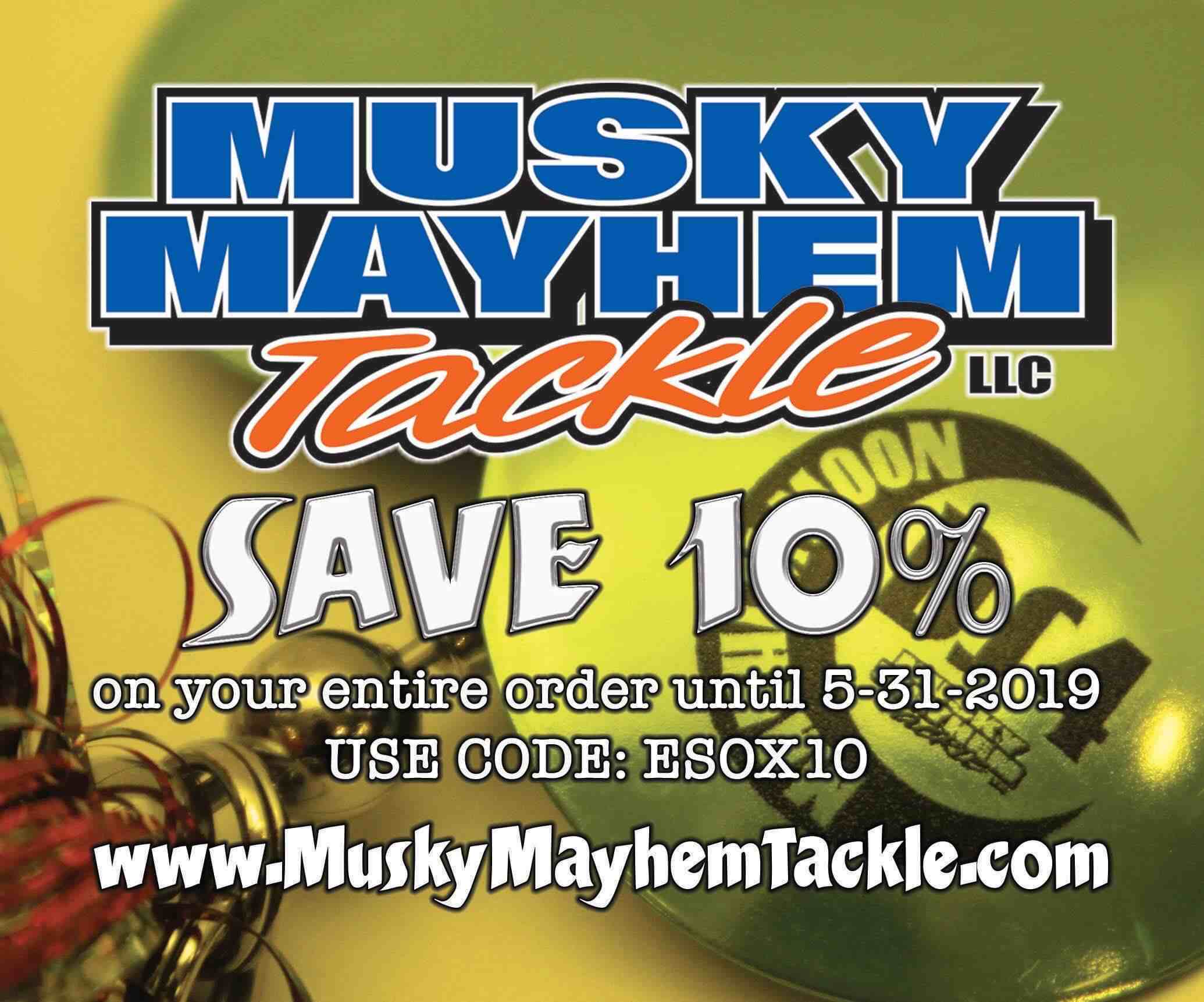