Already a year on the market, but finally available in Europe! Humminbird’s new Helix 5 is surely a great addition to the already legendary series of fish-finders. Described as the compact version of the 800 and 900 units, this one also features a wide screen. The New Helix 5 series offer a wide range of different options such as Sonar, DownImaging, 2D DualBeam Sonar, GPS, NMEA0138, Autochart, and the ability to navigate on Navionics Maps.

The version that I own is the Helix 5 DI GPS. When opening the box, you can immediately feel the weight of this great and compact unit. It’s light and feels very durable. The 5 inch widescreen has LED backlight, wich saves power and also makes things brighter in sunny conditions. What impressed me the most at first sight, was the fast and easy power on of this unit! When you press the power button, it will start up in the blink of an eye, something that’s hard to find on other fish-finders. When the unit is on, you can change the backlit LED bightness, and put the sonar on or off. This comes particular in hand when you only want to use the unit as a GPS, and not have the transducer connected, or simply don’t want to disturb the fish. The main reason why I chose to get the DI GPS and not the SI GPS, is it’s complexity. Sonar, DownImage options and GPS are more than enough. Also the SI GPS is more expensive than any other option.

The Sonar is used when trolling deep underwater structures and open water. You can set the sensitivity exactly how you want it. It features a 200/83/455/800 khz frequency, so you won’t miss out any action during your time on the water. The DownImage function comes in hand when fishing in shallow water. The visibility of this function is amazing. You can really see what’s going on below. If you follow a bit of practice you can tell the difference in vegetation what’s below the boat. When fishing over structure you can see clear below. This is one function I love about the DownImaging function! In winter time, where there is little or no vegetation left, you can find these back with an easy look on the screen. Because the GPS is so simple to controll, you can set waypoints with ease or make snapshots of your screen when hitting the ”mark” button. If you insert a micro sd card in the card slot at the left side of the unit, it will recognise your card and automatically put the screenshots on there. Once back home you can easy pull out the micro sd card, and put it into your computer to review the saved images. This way it’s easy to keep track on fishing reports or keep a collection of ”saved screens” in a map on your computer. When pressing the ”mark” button, the device will show you a pictogram of a camera, so you can see where you have taken your snapshots earlier before. 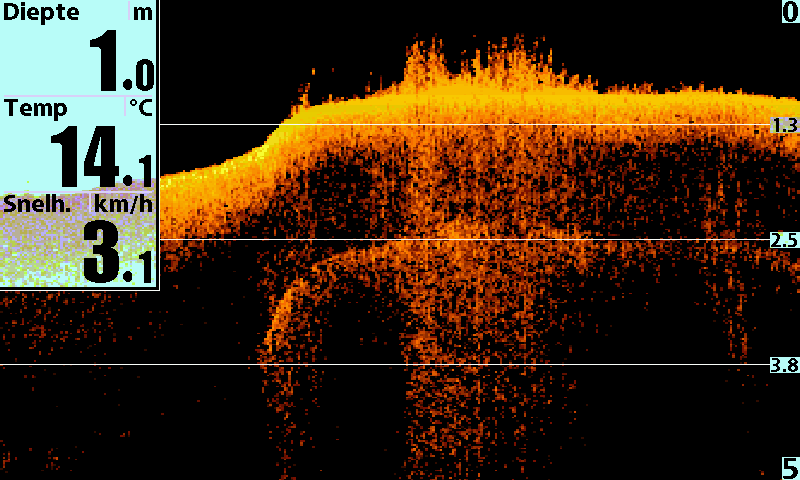 Weeds on the edge to a dropoff. 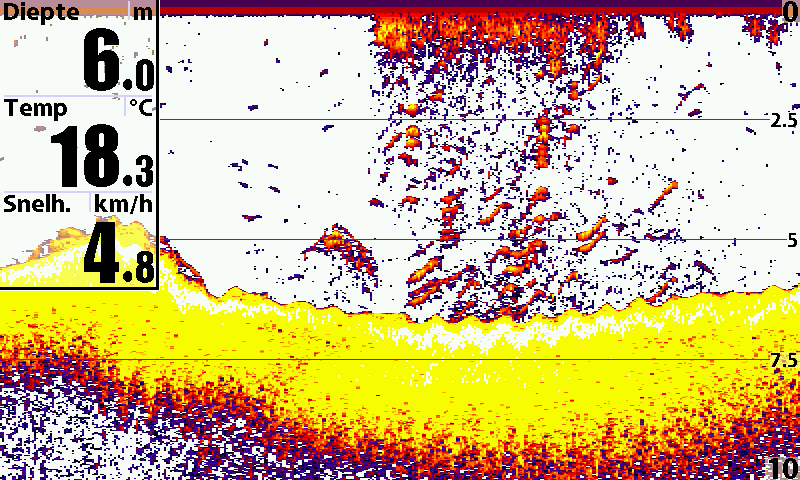 Deep water with fish (turbulence above is from a ship).

As far as the GPS function concerns, there is an internal map installed on the device, so you won’t really need to buy an extra map. The included map can be viewed in 3D, or from above, and you can zoom in as far as preferred, When setting waypoints, there is only one little thing that I would have seen different. If you press the ”waypoint” button, it will set a small blue dot, if you like to set a ”fish” or a ”weed” mark, you first need to go into the menu and edit things there. On the Lowrance that I previously got, you were able to do this straight away, and it would remember your settings. When it comes to battery life you can really control that one as well. I always set the brightness of the screen to 5 or 7. On a 12V 12ah battery, you will be able to fish round about 10 hours. I carry a spare, fully charged 12v 7ah battery with me as well, just in case. There is no need for the screen to but the brightness all the way up to 10. Like I said earlier, it’s LED, and will provide more than enough brightness. 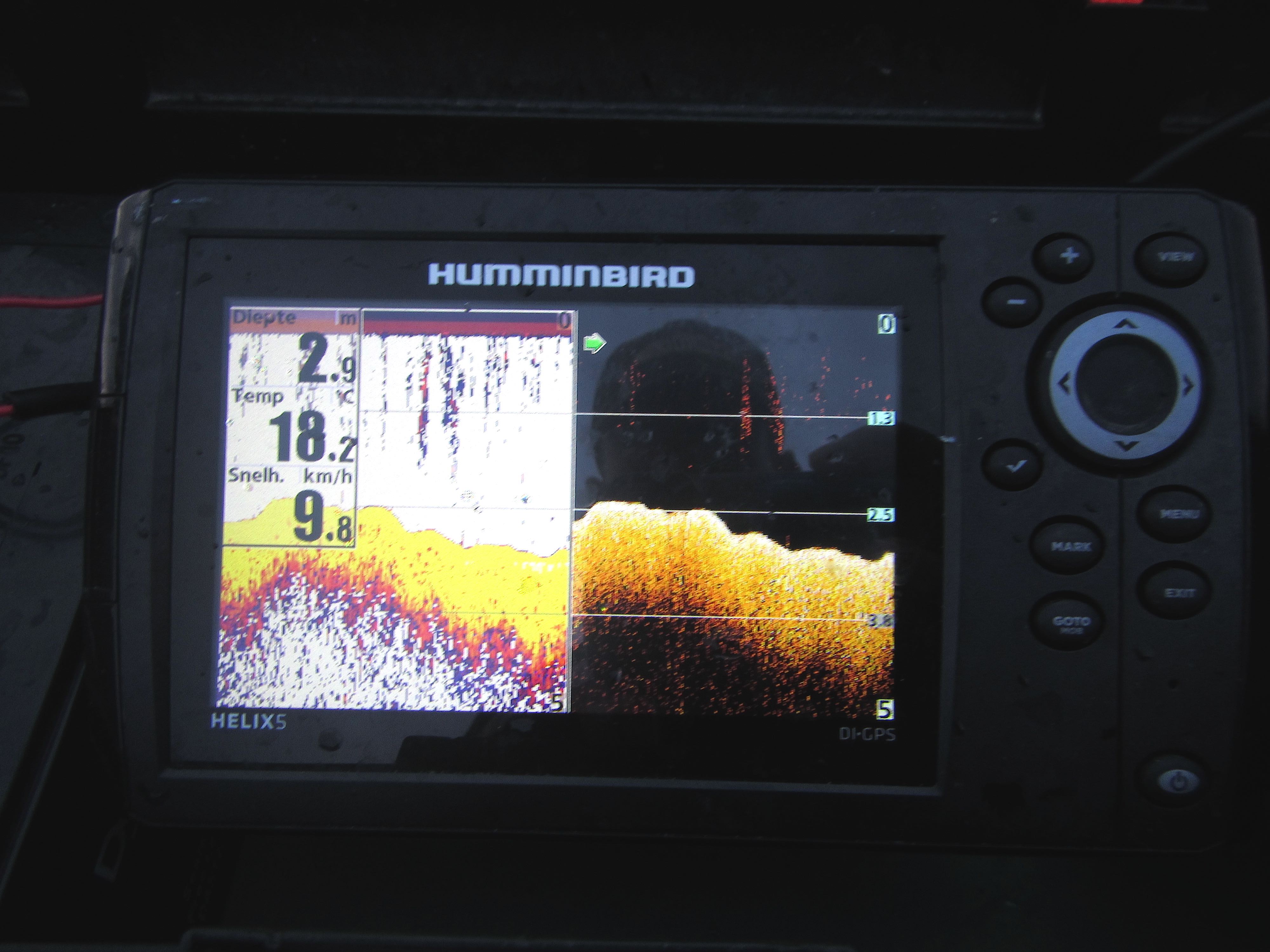 Split-screen function on the Helix 5, nice and compact.

With the 3 functions on this fish-finder you can’t go wrong, especially for the price range it comes in! In Europe they retail for 489 euro. In the rest of the world for about 359 dollar. The Helix 5 series of fish-finders is only a year old, and Humminbird already planned to launch the new Helix 7 series. So you might find yourself a bargain on this one, when prices will drop!

Great device, and definately well worth the buy!