Home / Drawing the Fishy side of Charles Weiss

Drawing the Fishy side of Charles Weiss Being one of Ontario Canada’s premier fish artists, Charles Weiss began his career at age 17 when he sketched the caricature portraits of all the teachers at his high school for the annual year book He has since provided art for 40 different publications from fishing magazines to national newspapers. Recently providing over 20 artworks for the “Fishes of Toronto” booklet. Most beginning anglers start with a burning desire to catch more or larger fish inspired by the cover image on their favorite fishing magazine, Charles Weiss is an artist that creates that art.

He is often asked how he puts together a painting and whether or not he copied it from a photograph. Simply put his answer is “I happen to choose an image formed in my imagination and then expressed from working up several small “thumbnail” drawings. Referring to my own photographs of a variety from a file I’ve put together or from tearing out images from fishing magazines that were ideal as a starting point for artwork.” The best reference is important to his art, he simply can’t work without it including habitat details of sunken branches, underwater vegetation, rocks and water surfaces. The primary idea for the art is a vision that was developed in my mind while fishing. He has been fishing for Muskie and Northern Pike for over 30 years and this has helped him take a lot of guess work from his artwork. On the water experience, research and fishing helps a lot in his art. When he visits aquariums he will draw a fish and sometimes add their usual wild environment without their glass walls. When he finally have a small drawing that looks promising he enlarge it as a detailed pencil drawing on canvas. Then begins adding with a medium size brush washes of background acrylic paint around the drawing. Progress is slow for these beginning steps as more details are added as he consistently keeps designing the image. The time to complete a painting depends from couple of days to several months and  the dimensions of the canvas and how much detail is in the scene. Large amounts of background colours are carefully painted around the large subjects such as the fish. My frequent problem is how to keep the art unique and from a fresh perspective. He has painted over 120 images of Muskie.

The recent cover art titled “Weedline Zing the Bling” 2016 December Musky Hunter Magazine is a good example of solving the visual problem of the timeless image of a fish about to bite a lure. He designed the scene looking up as the fish is swimming by chasing spinning blades of a lure and the mouth is closed with anticipated action of the strike. Painting the Muskie head in bright contrasting colours over a tangle of coon tail weed background and water of a medium to dark green. The lure at the top edge of the image is expressed in bright contrasting colours and easily seen. Hopefully you feel heart rush as you see the Muskie chase down the brightly coloured lure. Not only do his painting represent their subject with scientific accuracy, they also convey their very spirit. This is one of the differences between the fine art image with its subtle hues and the brighter more graphic illustration like art of a magazine cover art.

Scarborough Ontario Charles Weiss. He has been drawing, painting and wood carving from the fishy side of the brain for over 25 years for magazines and websites.
His full colour renderings of the Muskie are his creative way of highlighting the truth rather than evading it. Images playfully use visual drama and include such scenes as Pike and Muskie chasing down lures and anything that swims by their hungry mouths. The paintings below are some of my favourite works from this unique artist! 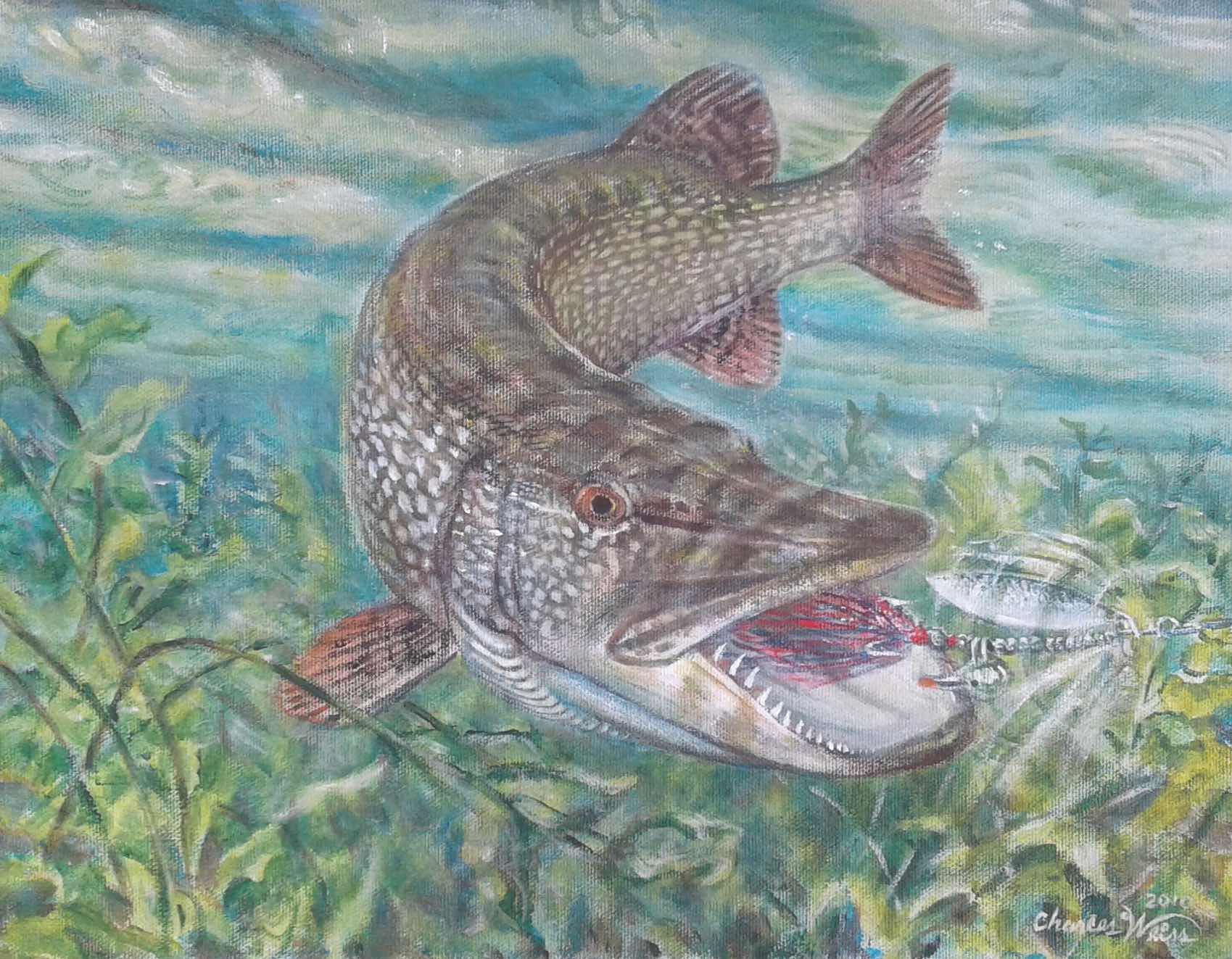 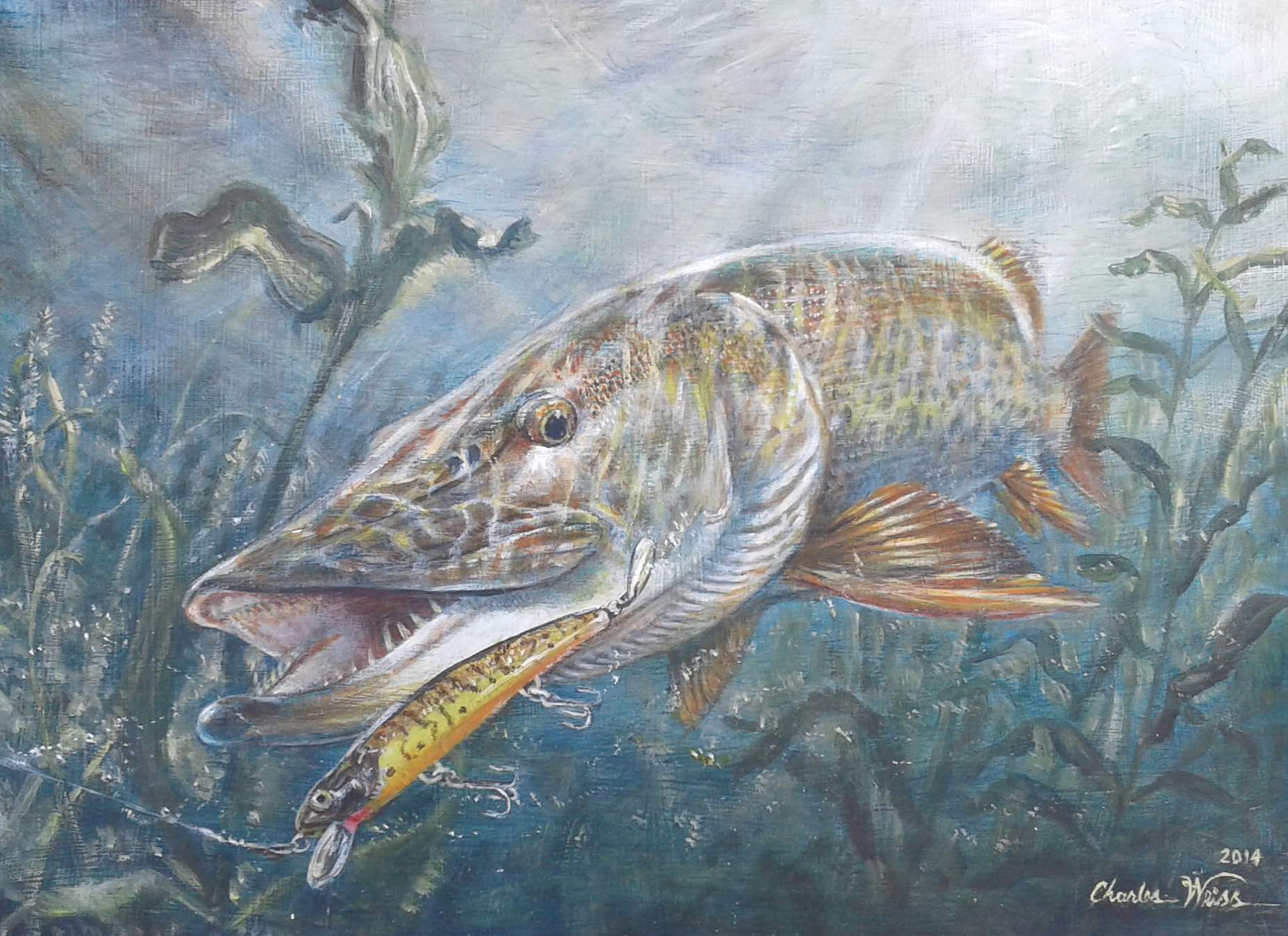 ”Calm before the Bite” 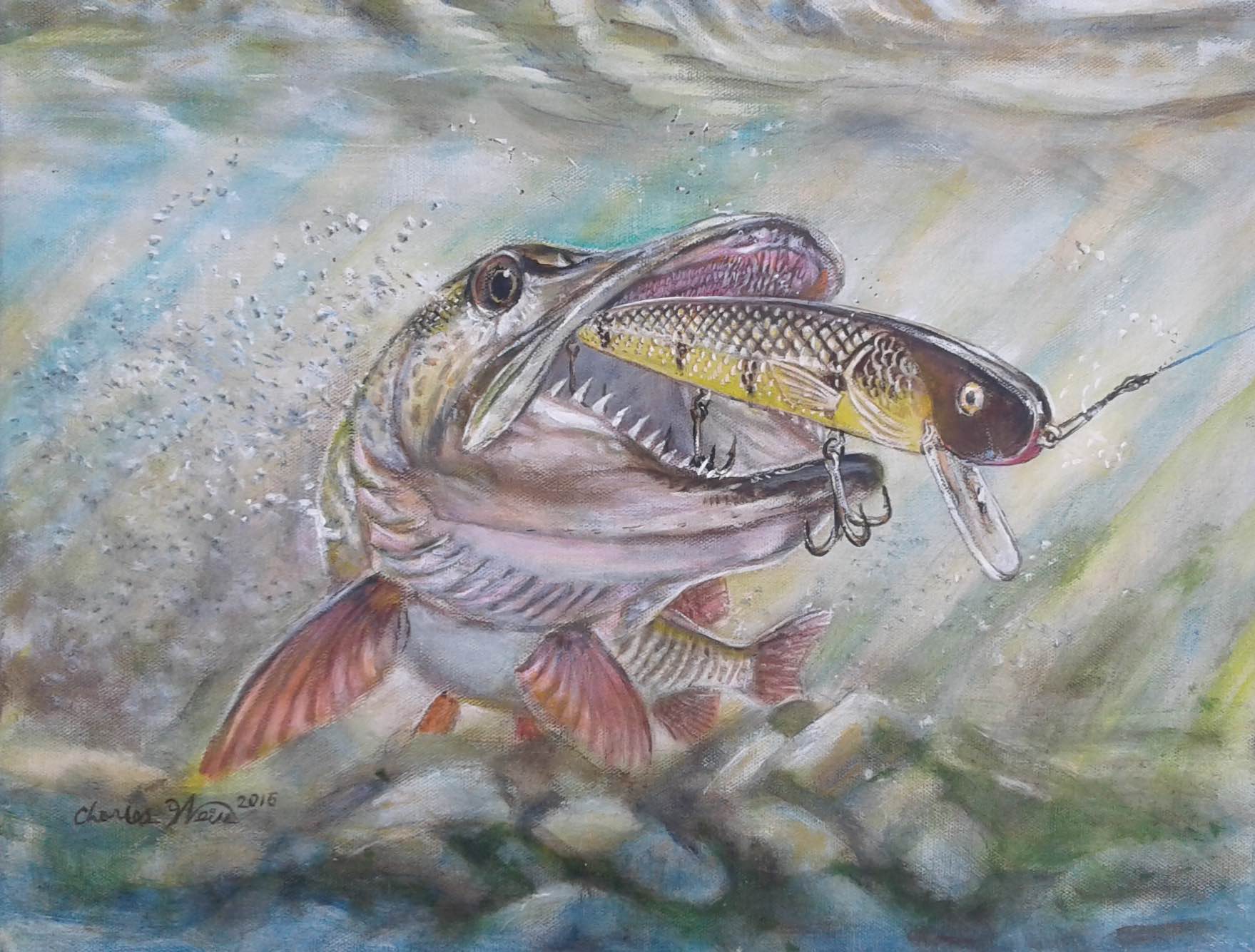 His advice to artists who are just starting to emerge with a consistent looking sportfish art: “Keep trying to express in your own unique way. Listen to stories of other peoples fishing adventures and try to express them in your own style”.

Charles explains: It was a personal challenge for myself to finally have my art published on a cover of a national fishing magazine. I almost gave up. I then decided I was going to paint a scene that would be dramatic and action filled. The painting titled, “Lily Pad Panic” succeeded. It was the cover art for Musky Hunter  March 1998, it features a underwater scene of a Muskie racing out from under some lily pads after a frog that jumped in front of it.” I have since painted almost a dozen covers for the magazine and my art usually appears in their Musky Hunter calendar. 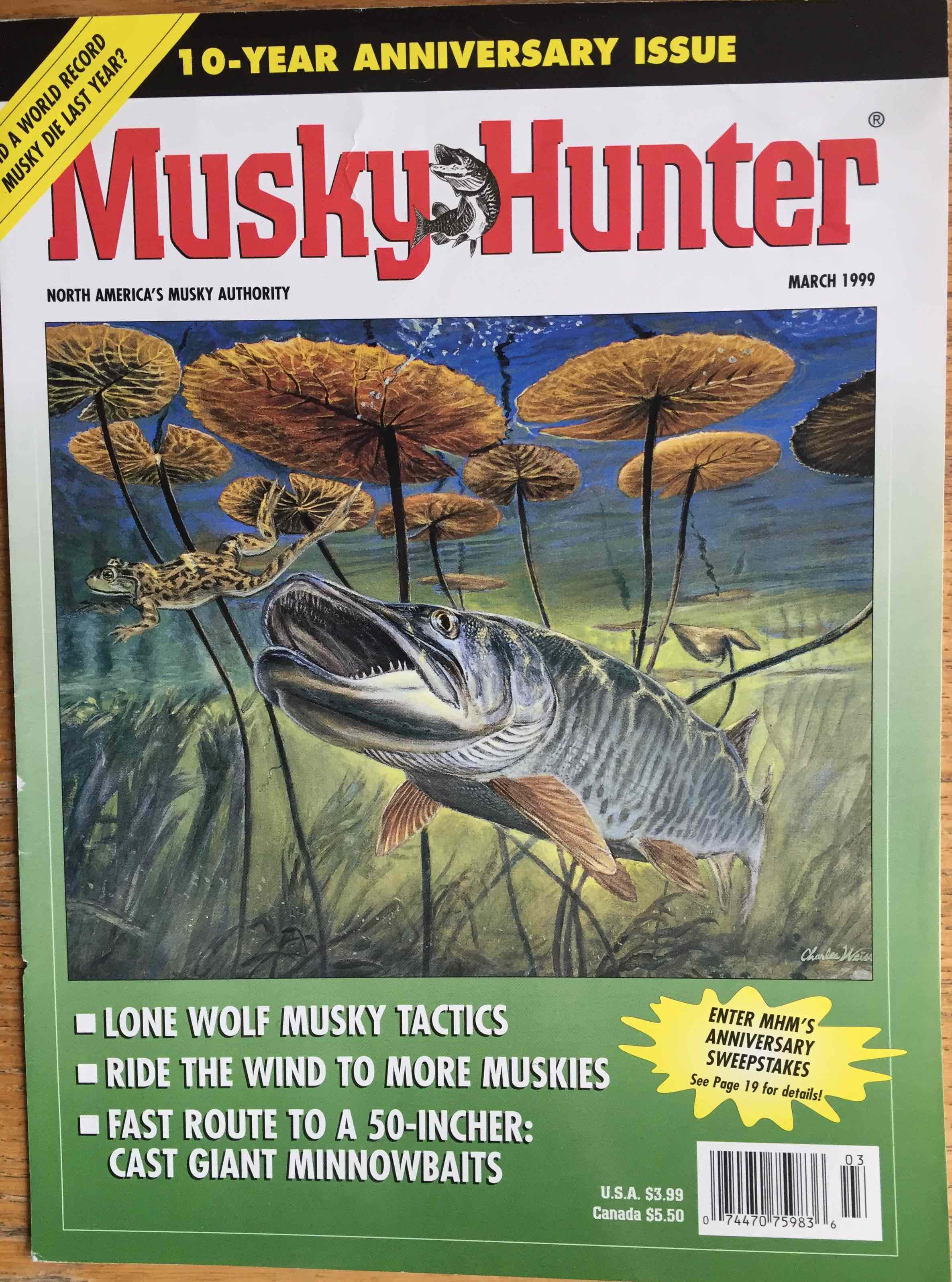 Instinctively we understand the resonant truth of the images. A popularity whose enthusiastic angler adoration rapidly increases as their reputation for quirkiness of diet and inspiring length grow beyond the fish. The dramatic scenes magnifies rather then reduces the truth that it speaks.

What sets Charles apart from other artists in the world is his ability is his ability to work in other mediums that include, acrylic, watercolour, scratch board, pencil and wood carving. His work can range from highly detailed paintings and drawings to loose abstract renderings of the essence of a sportfish. Many of his buyers and collectors are further discovering his talents with commissioned wood carved replicas of their Trophy Catch. They are a personal touch that represents the exact dimensions and coloured marking pattern of the catch that made their day special.

Ultimately what Charles the humorist sets out to defend with his “Muskietoons” is the many different aspects during the fishing season above and below the water. Laughter is a reaction that promotes a hospitable climate for diverse opinions.
He has some wicked fun with his variations on the Muskie creating humour that is valuable to non fishers included.
Weiss completes five to seven large paintings per a year. Limited editions of art is kept in very low edition numbers and are in very high demand. One only needs to view the artwork to understand why. For more information about Charles Weiss and his Art click on the link below: