As October progressed and we slowly roll into November, the Eco-system starts slowing down. Some bodies of water have already had their turnover, and water temperatures start to go down. Everywhere leaves are falling down the trees, and in some places, Winter has already shown his cards. One of The most exciting times of year has finally arrived, and as the water cools down, the feed is on, and what better way to target Esox in a landscape at the best of times!

Fall is always an exciting time of year. It’s when all layers of any body of water start to mingle and form one stable zone full of oxygen. Unlike during the warmer months of the year, in Fall, preferably after turnover, the water temperature becomes stable again. When the temperature of the water drops below 50F (10C) suddenly the underwater world starts to become active. The hunger mode has suddenly turned on, and fish feed everywhere in all water columns. This particular time of year, usually from the end of October to mid-December, is a great way to catch BIG Muskie or Pike on the edge. Like mentioned in a previous article HERE, fishing on the edge from shallow to deep water can be brutally effective, and if you’ve found the right depth the fish are at, usually from 10ft all the way down to 20, you can be in for a reward! 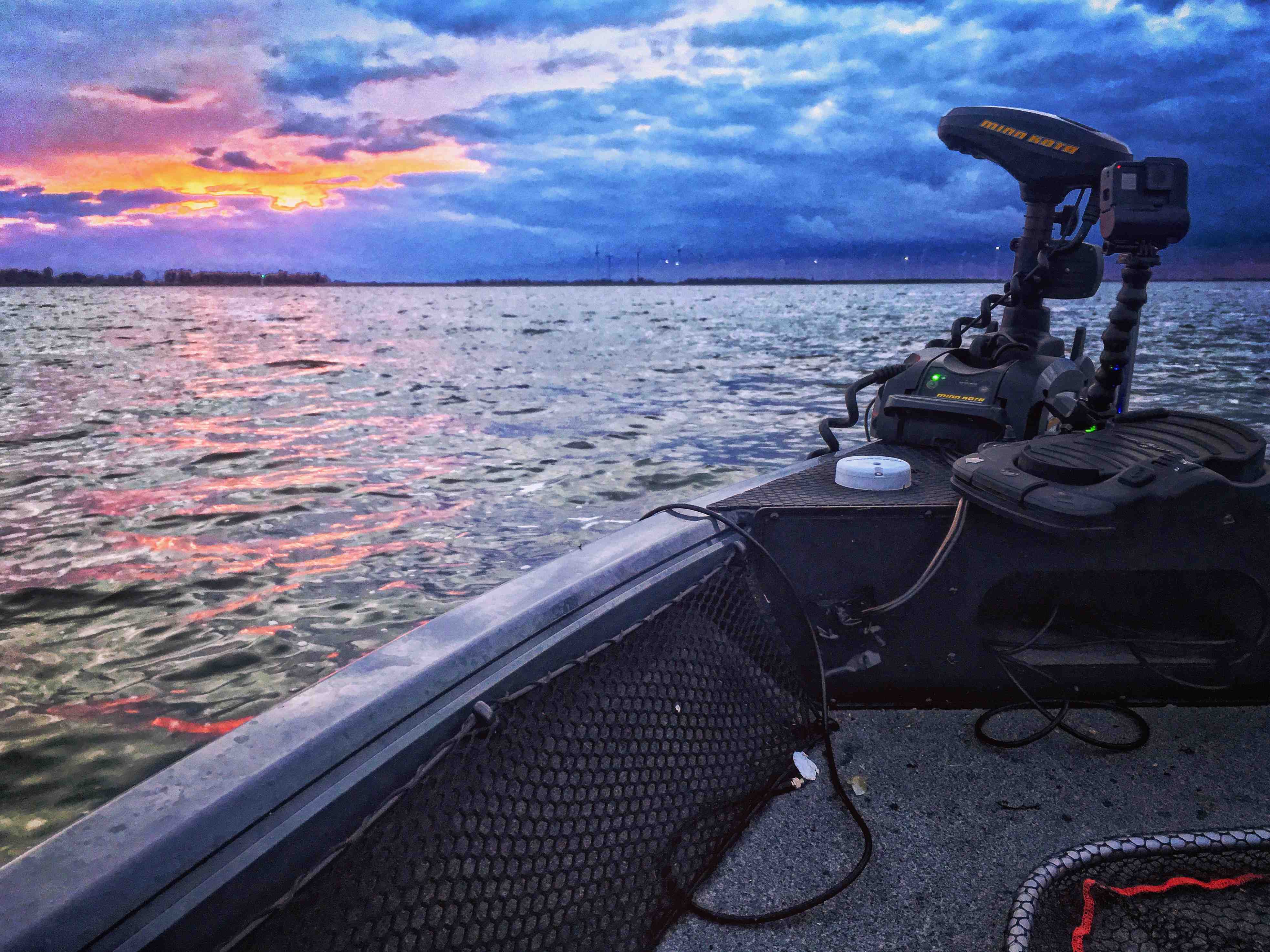 ”Beautifull skies mark the time that Fall is here”

Besides casting with a variety of different baits, trolling is a great way to cover water. In fact, this last technique is far more effective as well. When the water cools down, fish start to migrate to their winter spots. Unlike in Summer for example when they are scattered all around the lake, when the water gets colder, the Esox come together in wolf packs. Where and when is always the question and may vary from year to year, but one thing is certain, once you’ve found them the reward will be Big!

How do we start fishing? Well in Fall many fish migrate to certain break lines, drop-offs, and structure under water. These are often the places where there is an abundance of baitfish in all layers of the water. As mentioned in previous articles, it doesn’t necessarily mean that once you have found the baitfish you have found the Pike, but more or less it means that you have found an area that needs some extra care. Especially in these pre colder months on the year, the really BIG ones are usually a few miles away from areas with a dense population of baitfish, that is something you want to look out for, and that’s how you can catch these fish. In the Navionics map example down below there is an example of this! 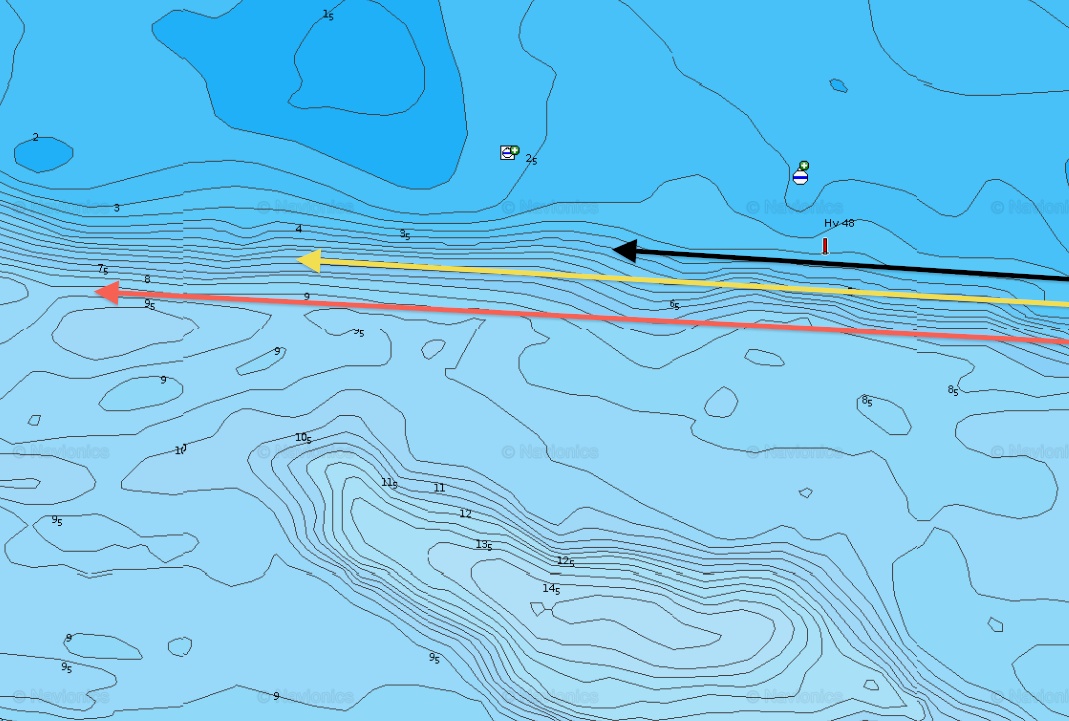 In the picture above you can see an example typical Fall spot around a deep hole. What you see here is a steep drop, next to the shallow water. The 3 arrows highlighted to show you 3 different ways how you could fish. The Black arrow shows you the area of the contour you could follow if you want to troll ”on the edge” close to deeper water. This particular spot will produce fish at certain times of the day, usually, in the evening fishing a key spot like this can be very rewarding, as the upper layers of the water contain a lot of oxygen, which attracts baitfish, regardless the water temperature, and so it calls in the Pike.

When fishing in the line of the Black Arrow, you can see that the edge goes in and out. When fishing from your boat, it’s essential that you follow this contour as close as possible. You want to stay right on the edge and fish in that line. Everybody of water has these lines but hidden below the surface. Regardless of having access to a map or not, when I’m on the water, I see lines in the water that are not visible to the naked eye. My intuition tells me where to fish. Over time you will learn to do the same. Having a Navionics map like this on your fishfinder is an absolute Must have! It doesn’t only enable you to fish way more accurate, but it also helps you to quickly gain knowledge over a water that otherwise would have taken you years to do so.

But back to the arrows, In between the Red and Black-line lies a Yellow one. This particular line is one of my personal favorites to fish. Halfway down the drop. Not too deep, not too shallow. You’ve probably already guessed it, a prime Fall trolling location. Now there are many ways you could fish such an area, but I like to fish large profile baits, that doesn’t go by unnoticed, and pull off a lot of movement in the water, and more importantly, stay right in the striking zone. That striking zone is somewhere between 10ft. No matter how deep the water is, it’s always like this. For some reason, this is a magic number, but if you’ve paid close attention to your fishery it’s not surprising.

Last but not least, the Red-line is at the bottom of the drop. This stretch of water can be very effective in the last stages of Fall when we go into mid-December. If there is still open water. Usually, when the frost hits, that’s the time when most fish tend to sink down to the bottom of the edge. Depending on how the Winter progresses after they may move up and down a bit, but again that all depends on the weather conditions. Fishing right below in the deep is something that I like to do when there is a period of high winds, which pushes the fish down, or a cold-front that’s moving in and out. Especially with winds from the North or Northwest / Northeast, the Esox go down immediately. Many don’t like the sudden change of pressure, and fluctuating pressures that are flying around sometimes at the tail end of Fall, so they move to deeper water. If you want to still catch fish, you need to follow, and you can do so by fishing baits that run down deep. Big diving lip crankbaits such as a Suick Cisco Kid Husky 1800 for example, or the Livetarget YellowPerch Jerkbait Deep and Joe Bucher DepthRaider, are excellent for this. If you really need to reach the bottom, sometimes jigging a Bondy Lake St. Clair grub, or just an ordinary Bondy Original will bring in the bites. 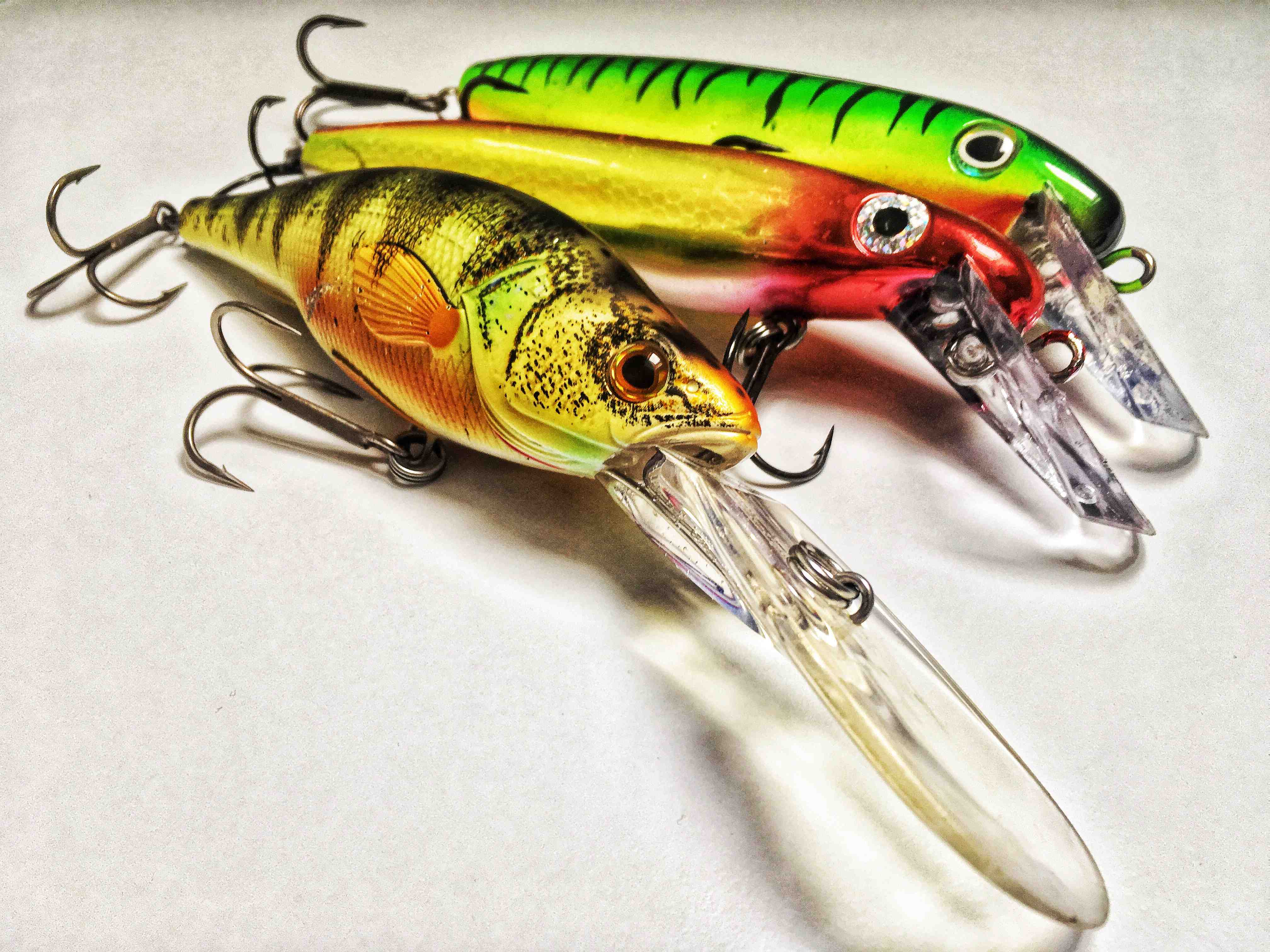 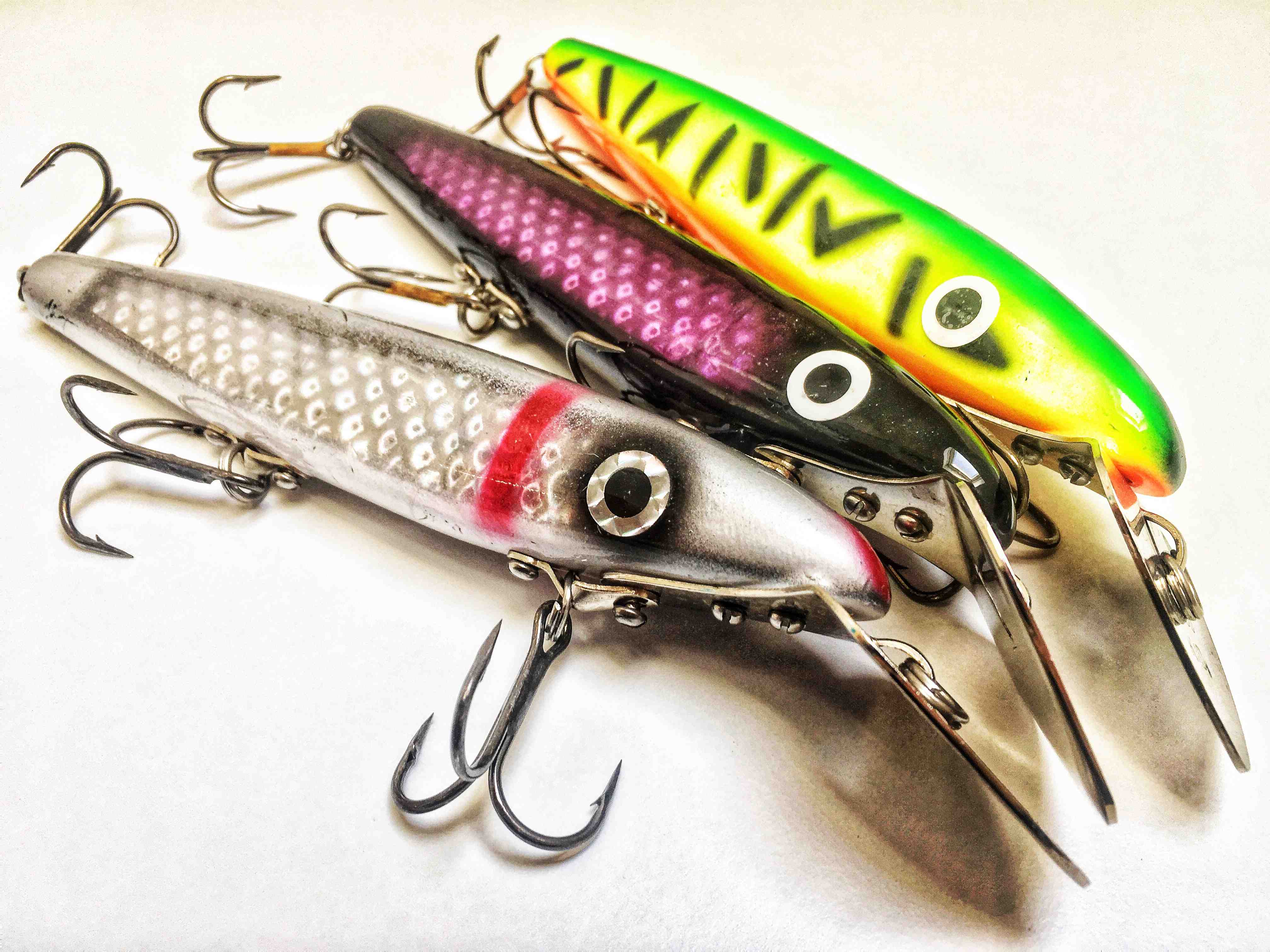 When following the contour, it’s all about constantly adapting to the conditions. No day is the same, and therefore you need to fish different every day. Pay close attention to the weather and you can help yourself in many ways by catching fish and making the right decisions is absolutely key here. If trolling doesn’t work, you can try casting, and another great Fall technique is to search for a deep hole in the water where you are fishing. Preferably a spot that goes ”around”. What this means is that there is basically a dead end. Not really because the water around such places continues, but in the deep appears an edge. When the water is deeper than 35 feet as you can see in the picture below without a doubt there will be a middle center zone where the Pike are suspended above deep water. Again you can practice the same technique like when you would be trolling an edge, but places like this are often very interesting for casting. And with casting, I mean BIG baits! 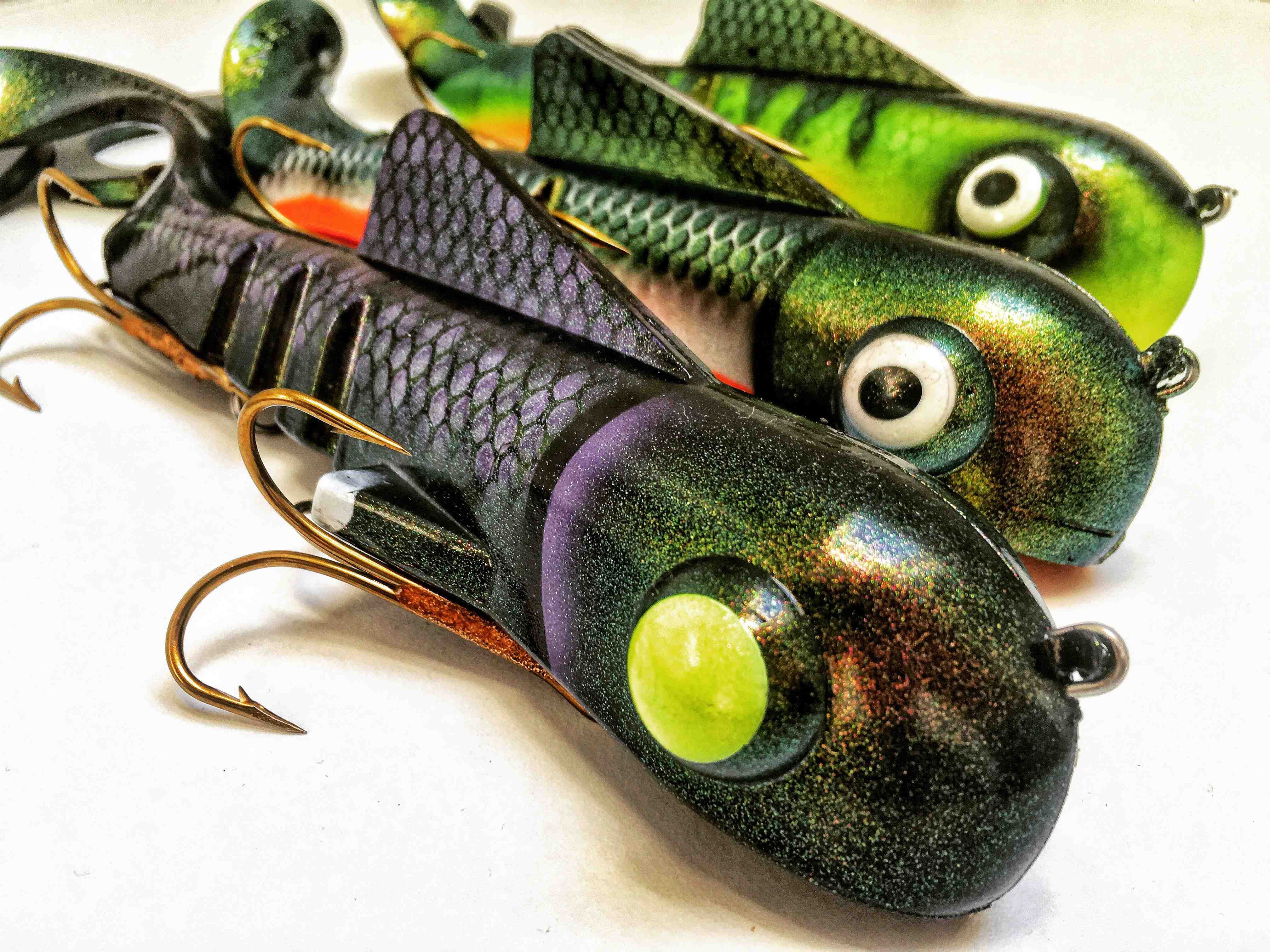 Remember you are fishing on some sort of edge here in the middle of nowhere in a large body of water. Although the ”deeper” water around is already 20 feet (6m), if you would hold that against the deeper water next to it, 20 feet can be considered as shallow, but still a lot of water in where fish can live and swim. So you want to cover as much water as you can in a single cast, and one way to do so is fishing with big rubber soft baits that go down the magical 10 feet zone.

Instead of trolling, I would prefer to cast an area like this. All depending on the direction of the wind, I would come in with my boat from the direction of the lowest red arrow drawn in the picture, and start anchoring up, or spot-locking on the edge of where the ”shallow” water meets the deeper hole. I would throw my bait around in that area and then start to fish around the hole which is pointed out with a circle. This way you can cover the entire stretch and don’t miss any fish. The baits that I would throw here are Musky Innovations Magnum or Pounder Bulldawgs, simply because they are perfect for covering large bodies of water fast. These rubber baits give off a large profile in the water and that’s exactly what you want to do here, standing out, and don’t go by unnoticed! 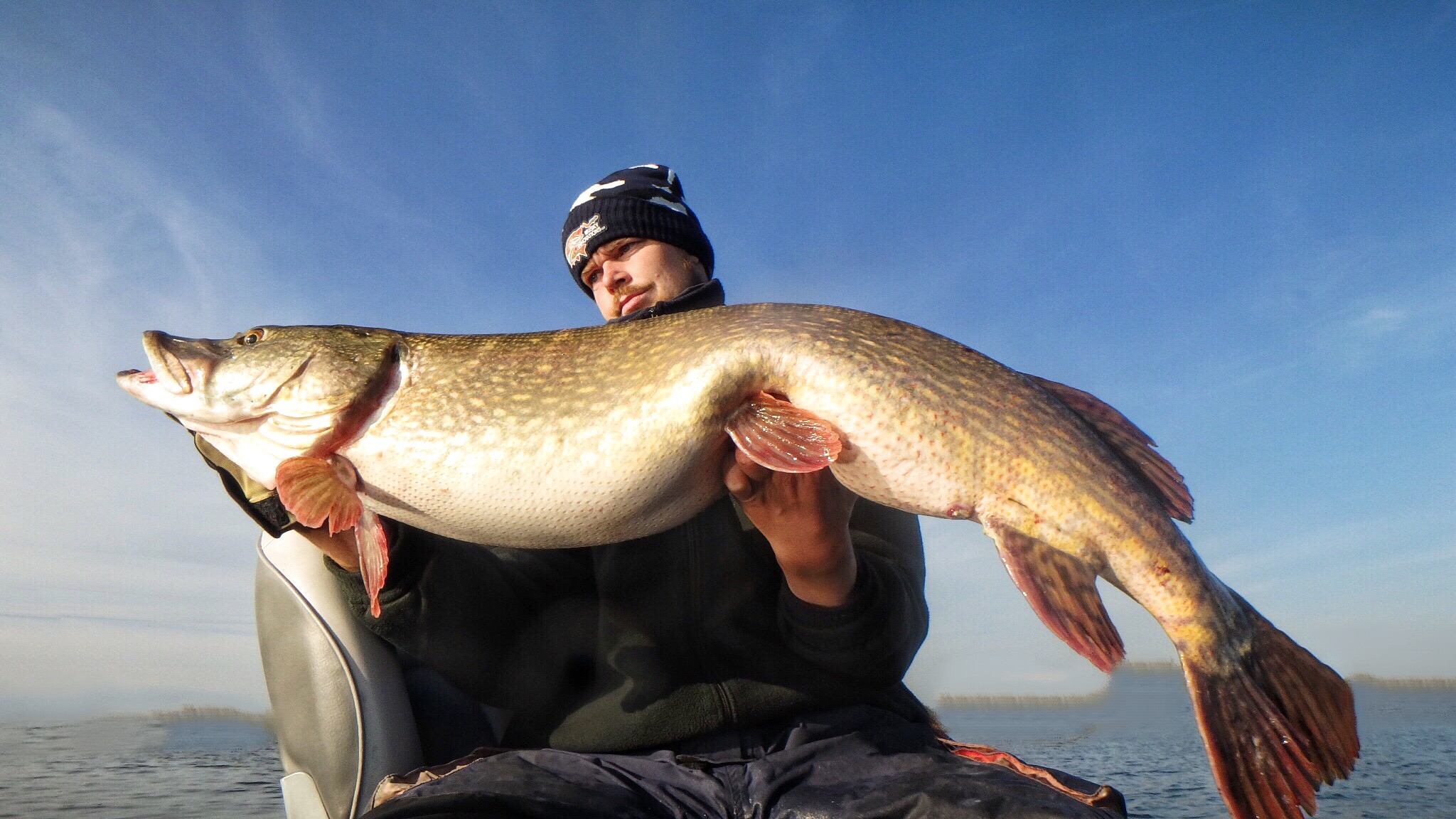