Coming from the land of 90.000+ lakes, Sweden, Fredrik Halling is no stranger to fishing. He has combined his beloved hobby with art, Pixel art to be more precise, and has achieved great things doing so! He explains:

I have always spent my time drawing thing. When I was a kid I preferred to sit in my room drawing monsters, or other things coming from my imagination. I started to copy my favorite comics such as Asterix, Spirou, Tintin, and many others. On my 7th birthday I got a rod and reel, and the same evening I pulled up my first Pike, I was hooked! From that day on I spent my time drawing comics and fishing. During my summer spring brakes, we moved to our summerhouse about a 1-hour car trip from home. Our summer house lies very close to water, the Baltic sea. And at an early age, I learn to handle our small boat with a little outboard engine of my own. So, you can say that I was dedicated to Pike fishing and comics art from I was 7 years old to 21.. The year 1993 I begin a comic art school, and there I was first introduced to the aquarelle technique, I began to experiment with the coloring of my drawings. For an exam work, I did a child book about a small baby Perch that got lost from his family and had an adventure trying to find his mom… and he almost got eaten by a…Pike of course.

In 1994 I did some comic illustrations in aquarelle and ink, and send it to three fishing magazines here in Sweden. Two of them answered the day after and wanted my illustrations on a regular basis. I chose the Magazine Esox as my first customer, and I did a lot of illustrations during the years that followed. 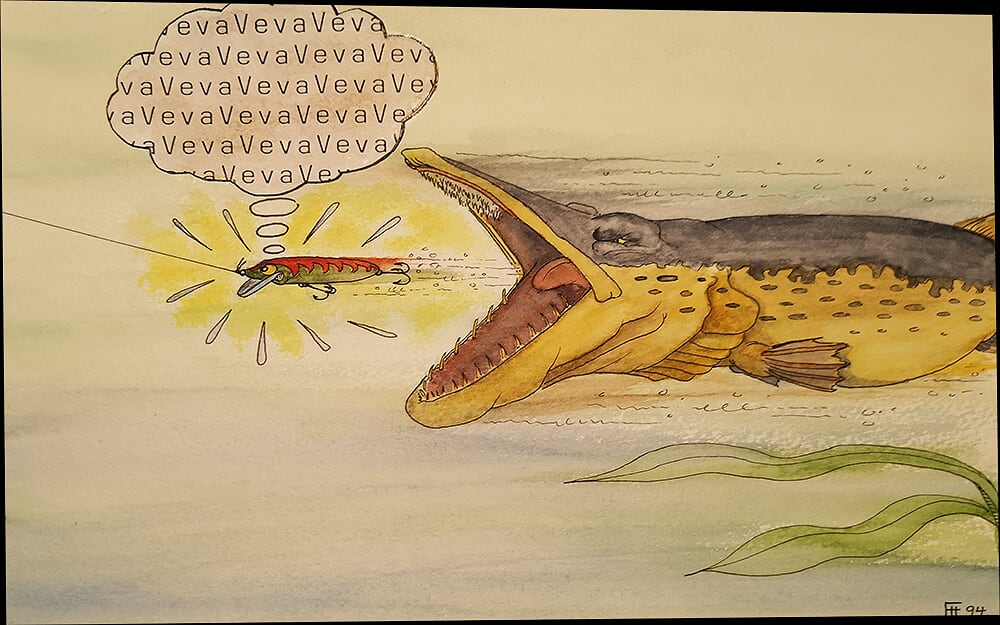 During the years to come, I took educations in the Multimedia and CD-ROM industries, I learned to create my material on computers and I become more and more digital. 1997 I got my first real job as a multimedia producer at a local software company. Parallel with my job I continued with my comics in magazines within the snowmobile and sport fishing areas. When I met my wife and we got our daughter, my dedication for fishing and drawing faded out, so I took a break from both in several years. But around 2007 I felt ready to start fishing again, I bought a trailer to my boat so I could try fishing some new waters. I didn’t feel any need to start drawing again until 2015 when I tried to find some nice stickers to put on my boat, I wrote emails to some big companies and they send me their stickers for free, but I got so disappointed on the designs, I didn’t like them and they were too simple. So I began to sketch on my own designs. I put some drafts in some Facebooks fishing groups and the response was Great!

So that’s when I started Pixelon Illustrations in 2016. I did a lot of logotypes for Swedish bait builders and some sticker designs. And to be honest, my first stickers didn’t look good at all. I did them in vector format in Adobe Illustrator and had limited possibilities to put that ”extra” in the designs such as shadows, dust, and scratches. 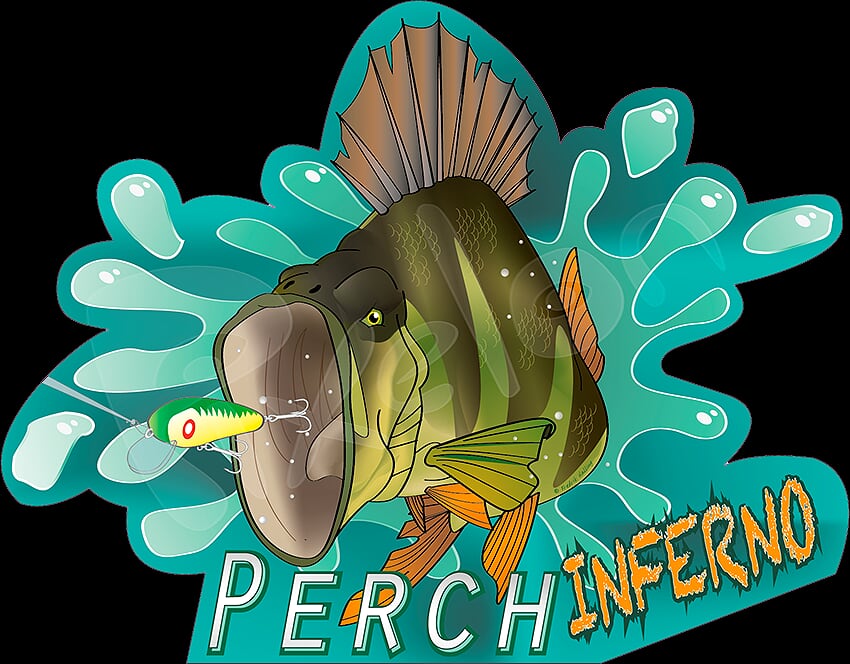 I started to experiment with both Adobe Illustrator and Adobe Photoshop. The first part of the design was done in Illustrator and then later I moved over to Photoshop. Now I can put a lot more details in the images. I mostly draw Pikes since I just LOVE to draw them, it is so easy to make a Pike look mean, angry and cruel with that mouth, teeth, and long torpedo body. I have never had a goal to make my drawings realistic, I use to describe my work as a mix of realism and Disney. I try to make the body shapes, fins and pattern of the fish based on how they look in reality, but always try to stretch that away on the heads, basically the eyes and mouth.

So I continued to post my art on my Facebook, and one day I got contacted by Fladen Fishing. They wanted my fish drawings on their clothing line. When starting out, I always produce a fish and begin to work on the sketch on paper. Later, when I’m satisfied with the paper sketch I take a photo of it and move it into Adobe Illustrator. In Illustrator I set the outlines, and then I move the design over to Adobe Photoshop. And here I do the major work starts! Coloring, shadows, background, etc. And that is how I make Fish Art! 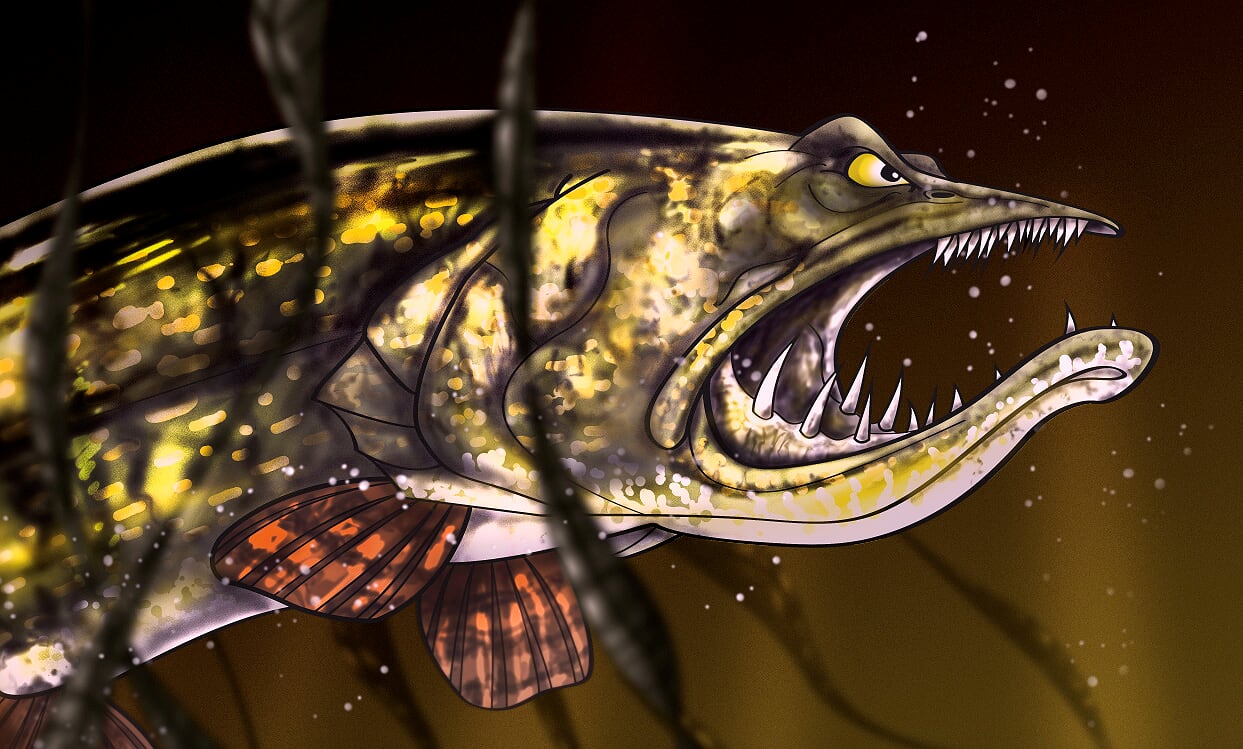 Or watch the timelapse video of a ”Halibut” coming to life!